Under the Hood - How the plugin works

It's great that the rollout building and deployment is all automated, but you might want to know what happens in the background with your valuable code and WMS system.

Steps in the Build Process

What Files and Versions are selected

The diagram below illustrates which file versions end up in which release. Basically, it's the latest version of a given file within the release. 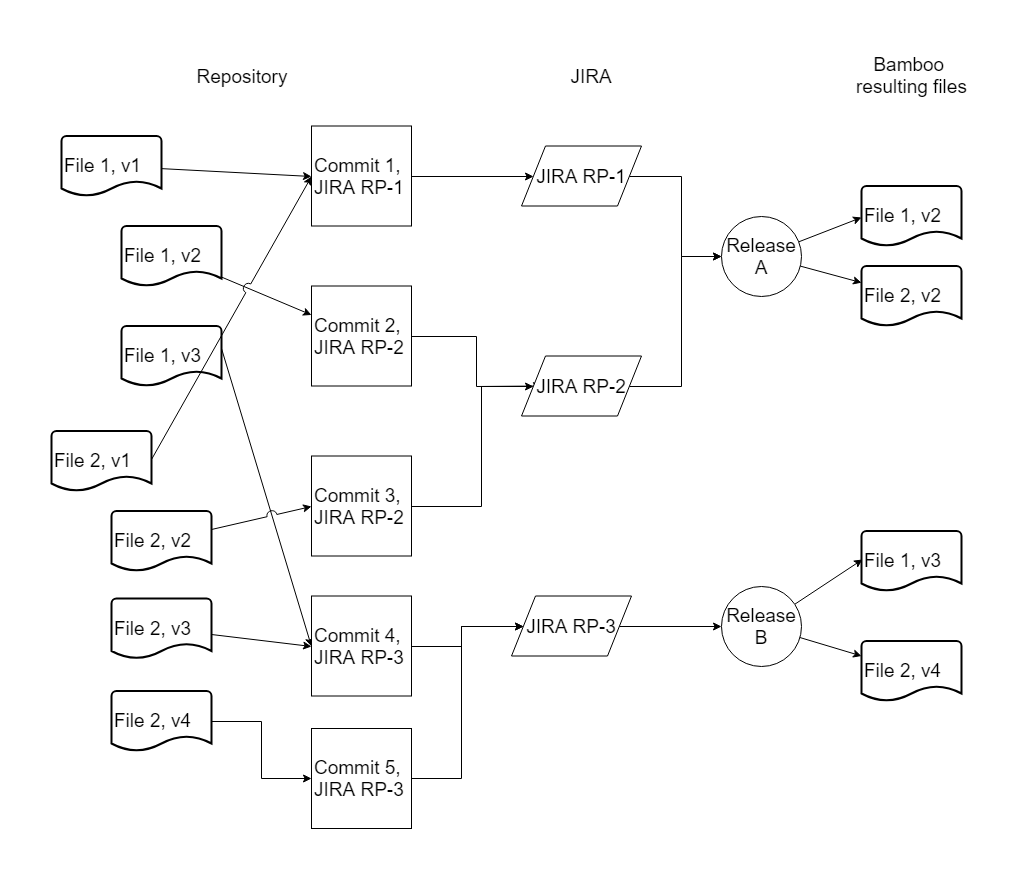 The Build Rollout task deals with files that were added, modified or renamed in the version control system.

It looks at the latest version of each file within a Version/Rollout and determines if the commit 'action' was an Add, Delete, Modify, Rename or Copy.

In case of an Add, Modify or Copy, we just add the file to the rollout, so it will add or replace the file in the target environment during installation.

In case of Delete, it will add a 'REMOVE' statement in the rollout install script (as opposed to the regular 'REPLACE' statement)

How are Files Sorted

Once we have all the latest versions of each file, it is important that files are installed in a certain sequence. This is mostly relevant for .csv files or other configuration files that update data in the databse.

In Blue Yonder WMS, there are no database constraints to prevent order lines from being loaded before the order headers are loaded for example. The standard way of loading data is to use straight database inserts. When using that method, it is not important which datafile is loaded first, as long as all data is loaded for a given rollout. For example, locations can be loaded before areas are loaded.

However, when projects customize the mload control files to use moca commands (e.g. 'create location') instead of database insert statements, then the load sequence does become important. This is because most moca commands do a reference check, for example to check if the 'area' exists before creating the location. The advantage of using moca commands instead of straight database inserts is that the mload control files can generate sequence numbers, can add descriptions and are more flexible with custom fields.

The Build Rollout task has a built-in list for sorting the Blue Yonder WMS tables in the right parent-child sequence. Future releases will provide a config file in Bamboo where this list can be edited.

It is possible that there are multiple files updating the same data. For example, we could have two csv files updating the same 'policy' value in the Blue Yonder WMS. It wouldn't be a good practise to have that scenario, but it could happen nevertheless. If those two files ended up in the same rollout, they should be loaded with the oldest file first.

The Rollout Build task makes sure that files within a given directory are loaded oldest first and newest last.

← Getting Started & Setup Jira and Version Control: local or cloud based? →